Once again we (SWLRC) were proud to host a fine collection of vehicles at the WFoLR and we've got a good writeup in The Landy (see https://issuu.com/thelandy/docs/landy_december_2022_small for the full issue
Katy was of course on the SWLRC stand and once again I was honoured to be the compere for the display of vehicles 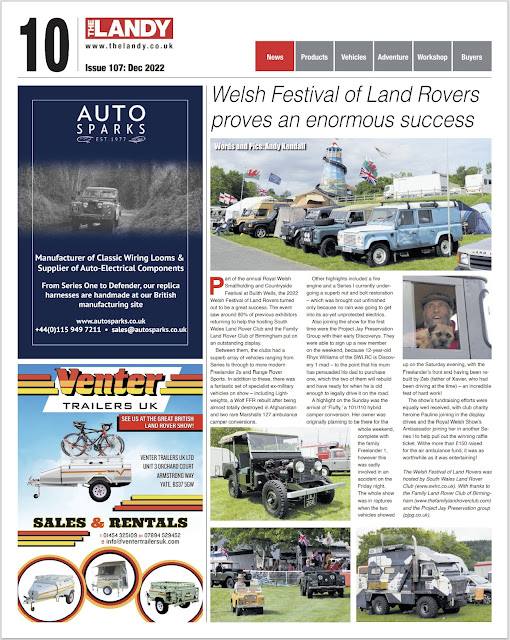 Posted by Shenstone at 09:42 No comments:

After all what could go wrong with that?

First part is of course under the bonet where the engine oil, oil and fuel filters are changed. Then underneath to do the gearbox and transfer box oils. 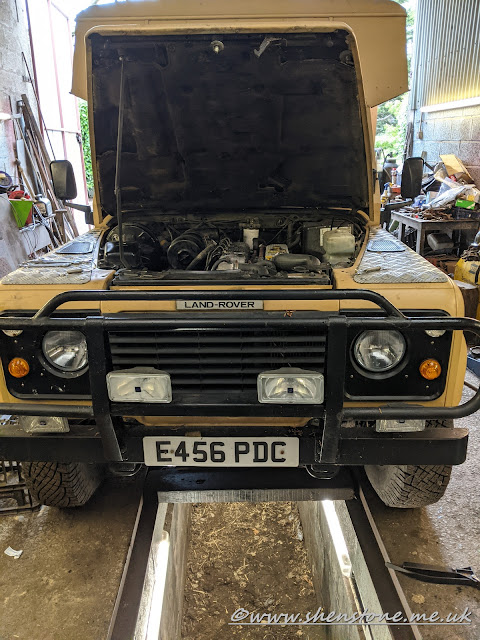 Then the front diff, and then round to the back what could possibly go wrong at this late stage...

As many Land Rover owners will know the filler plug on the rear differential is a tapered fit and you just screw it in until it becomes a bit tighter. What happens if you are a bit ham fisted is that you go too far and you screw it right through the timing case and into the differential

What this means is that you can't move the vehicle without causing probably irreperable damaage to the differential and it all has to come apart to retrieve the filler plug. 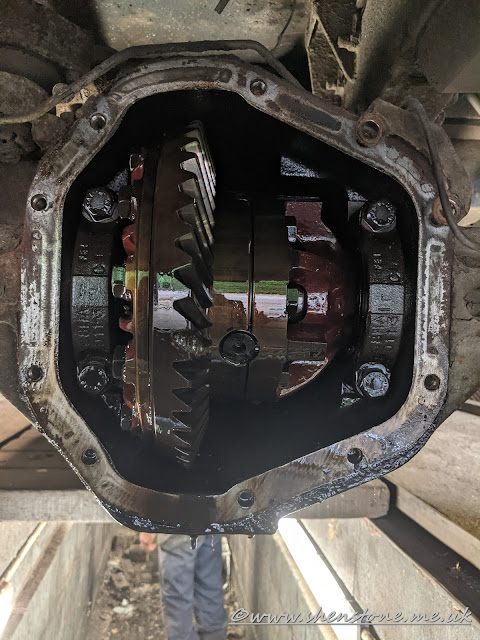 At least it meant a full oil change and a good check that the gears were in good shape.

Posted by Shenstone at 13:26 No comments:

Email ThisBlogThis!Share to TwitterShare to FacebookShare to Pinterest
Labels: Differential

Putting things back after taking them apart is just the reverse of taking them out which isn't very exciting so I will skip most of it, this time
If you are interested take a look at the post https://landroverkaty.blogspot.com/2022/09/fault-finding-and-removals.html and consider doing it all backwards
The only difference is of course that you are fitting new components and gaskets such as the one that separates the steel of the injector pump from the aluminium of the timing case 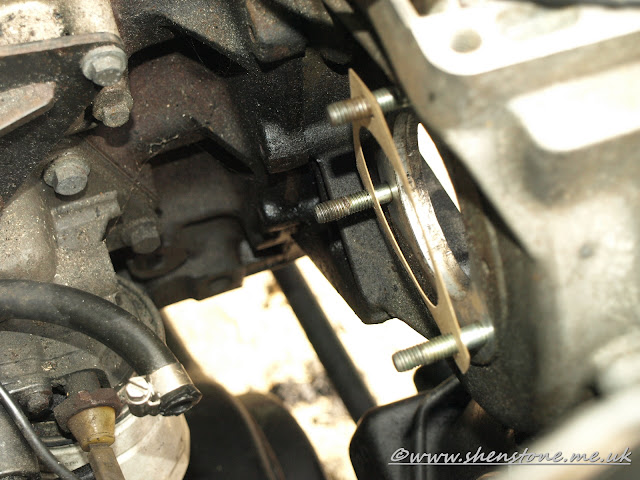 New pulleys and tensioner inside the timing case, new crankshaft oil seal and then set everything in the position that you need for the timing to be correct (there is a pin that fits through the injector pump, a mark on the crankshaft pulley and a notch in the flywheel) and then reassemble the case, fit the crank pulley and the fan pulley (gicing it a hard whatck to ensure that it's on properly) and then the fan belt. Connect everything up again, Check the tappet / valve clearances because the rocker has been off and she's ready to be started.. so how did that go?
Play the video :)
Posted by Shenstone at 23:08 No comments:

Having found the mess inside the timing cover the next steps were to start removing parts to see what was the result,
First off was the timing belt, cut through with a blade it was easy to spot the faulty part  which had been stripped and almost broken through 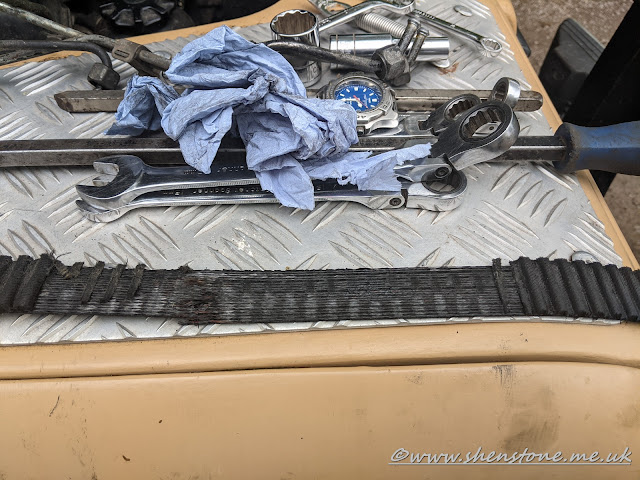 Then some more investigation under the rocker cover to see what damage there may be. On first look things are at least oily and together 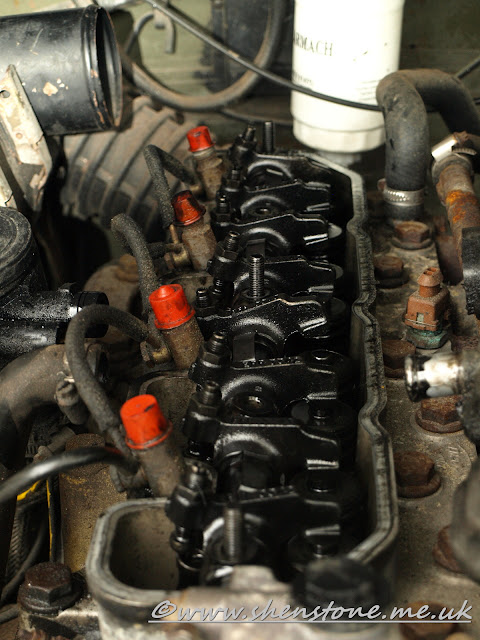 But on checking them (one at a time to keep them in their original place) two were discovered to be not a straight as they should be . 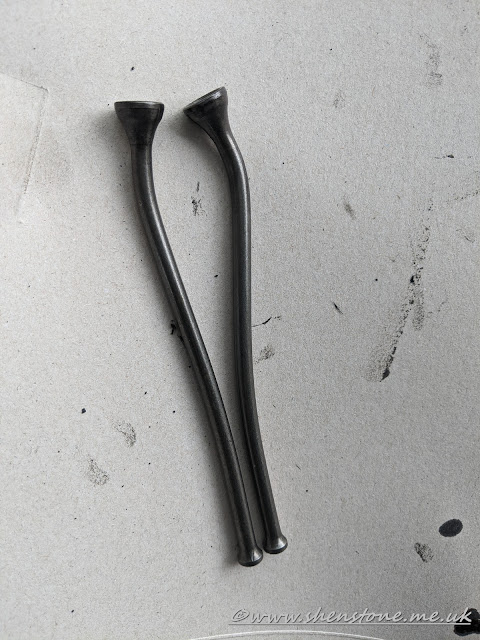 So two of them were added to the parts list I need for the rebuild. next step was to get the injector pump off and send that to a specialist to see if that was the root cause. First step detach the pipes to the injectors (which I put caps on to stop any dirt getting in) 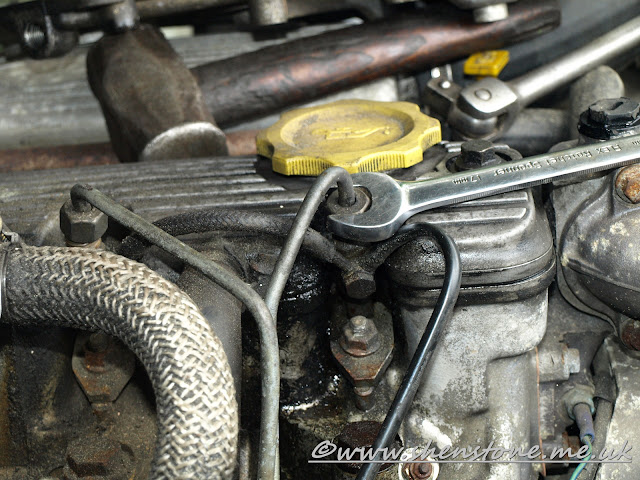 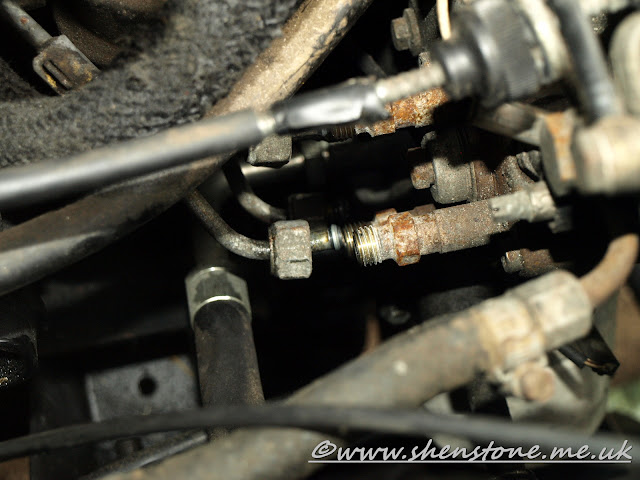 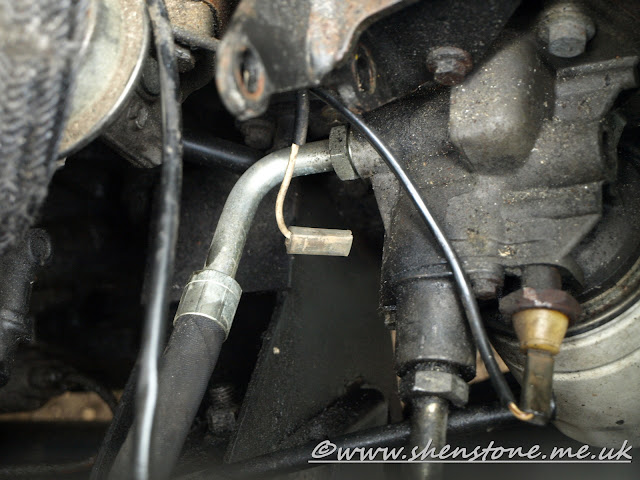 Then remove the fuel pipes going to the unit 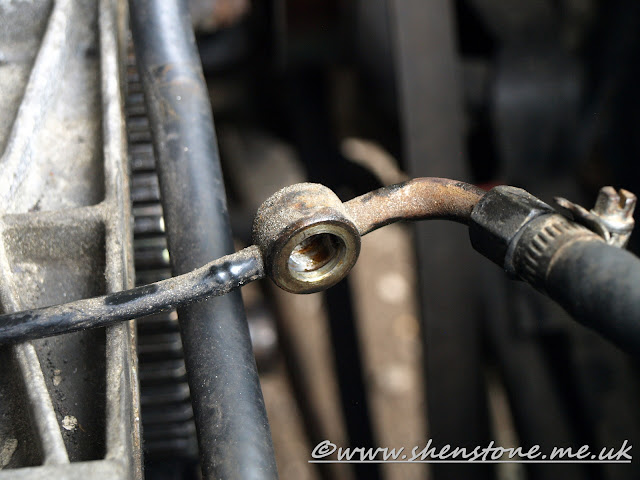 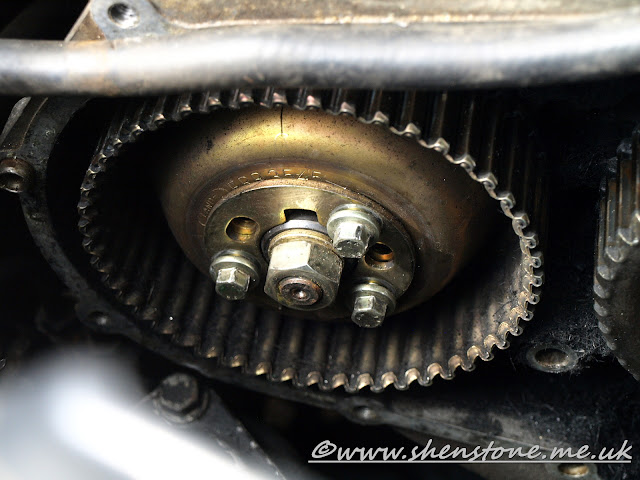 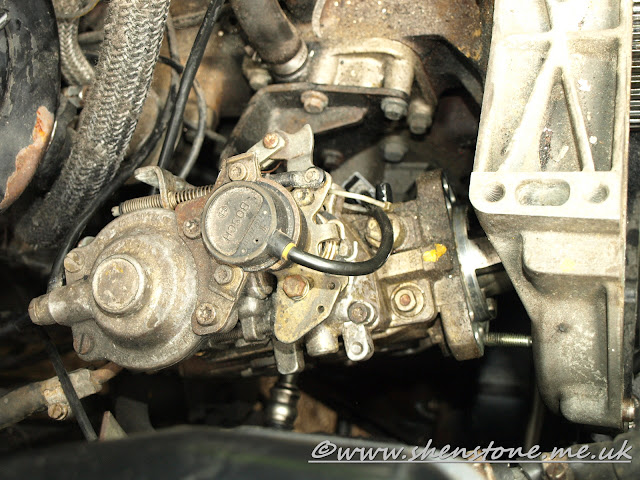 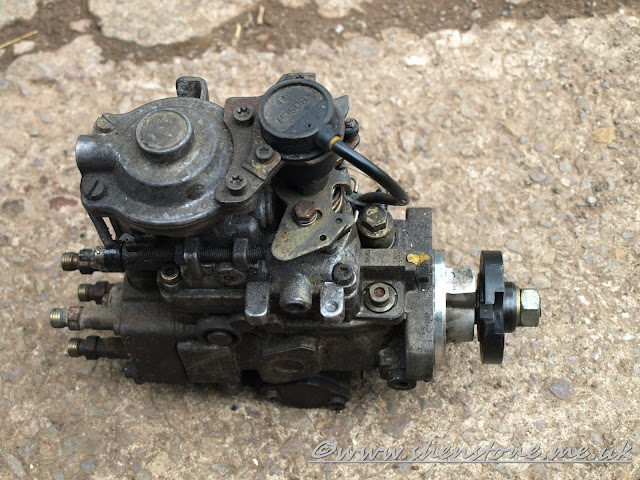 Posted by Shenstone at 19:52 No comments:

After getting the fan out of the way it was a fairly easy process to remove the fan pulley (given everything was locked up there was no hassle stopping it moving. Simply put on a long bar and remove the nut 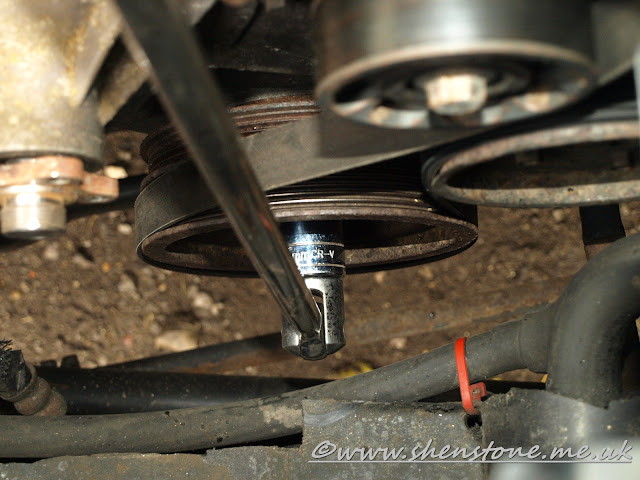 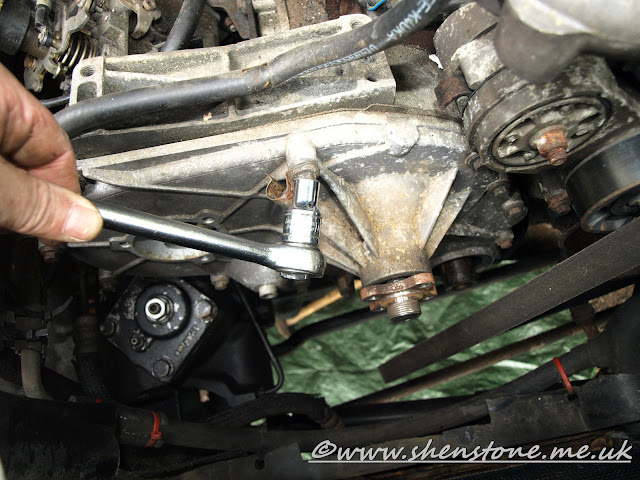 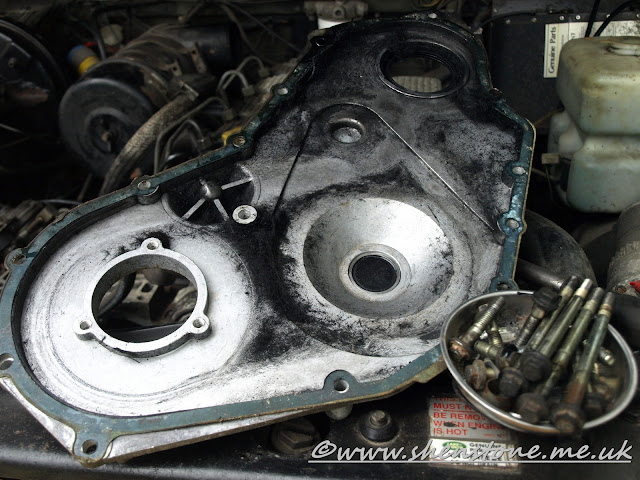 Whilst some of the teeth were still in place on the belt, others had been stripped off and had been transformed into all the fluff that you can see on the inside of the case in the picture above, and between the pulleys in the picture below 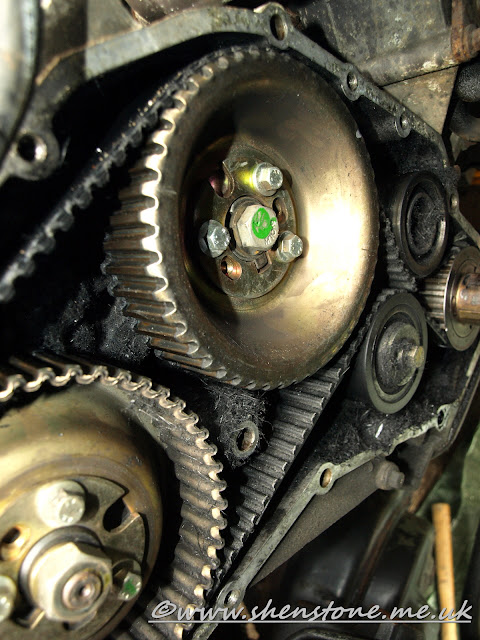 The next job was to see if the injector pump was to blame (as was suspected because no fule was coming out of it) so with the belt cut a power bar was put on the nut at the end of the pump (bottom left) and an attempt was made to move it... It was solid!

So it's got to come out to be sent off to a specialist.. That's going to be the next story

Posted by Shenstone at 16:25 No comments:

This felt like the longest day, in fact the rescue and recovery took just over 24 hours, but the story starts well before this

All went well on our drive to the lake district on holiday until we decided to stop at Tebay services which has an excellent farm shop attached so sells high quality products which we thought would be a great way to start our holiday.

So we pulled off the M6 and into the services and the trouble started when Katy cut out as we were driving in on the approach road. She cut out... we were lucky to be able to coast into one of the first available parking spaces. I though we may have inadvertently run out of Diesel because the fuel gauge has been faulty, but we had filled up before setting out and the known range was a lot more than the 250 miles or so we had driven (it's about 350 on a tank full).

To be on the safe side I went to the garage and got 10 litres at motorway prices (ouch!) and put that in, but she still would not fire up.

I had some spares, but wasn't sure so the next thing was to bring in an expert who could help me if one of those would be useful.

The rest of this tale will be told through the medium of song and pictures (  Apologies to Burt Bacharach / Hal David / Gene Pitney for butchering the obvious song ... ) and at the end are a whole bunch of thank you's to the people who helped us along the way

Now the pictures and some real information 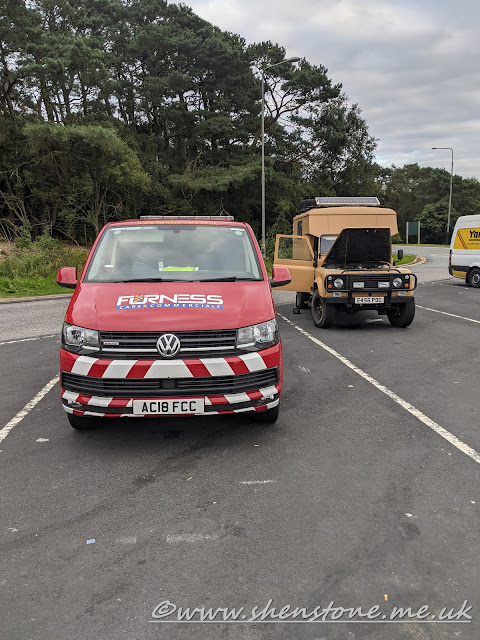 Michael from Furness identified that our injector pump was not running at all despite having power and fuel delivered from the electric fuel pump. That's not a roadside fix so a recovery was going to be needed. Given we needed a larger than average lift, he called for a truck which was about an hour and a half away 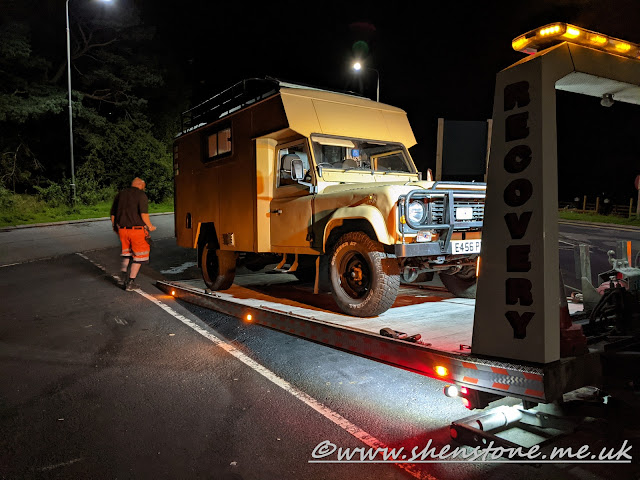 It had got dark by the time that John from Lowe's turned up and took us onboard his truck (which we have to say was the nicest of the event so thanks for that Lowes). 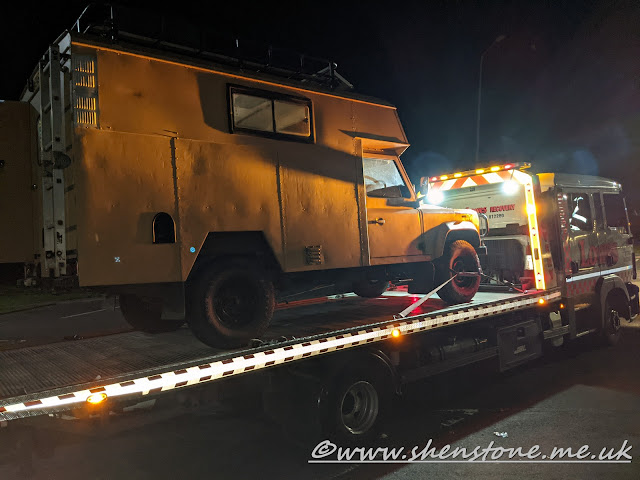 Soon we were off with a plan to meet another truck at Strensham services about 2:30 am.
However A couple of hours into the journey disaster nearly struck for us all!
John had to deal with a front tyre blow out at speed on the M6 at just after midnight and it was only through his excellent driving and the lucky situation that the motorway was so empty that he was able to bring the truck (about 12 ton with us fully laden on board). it was the drivers front wheel so as the enormous bang happened we started drifting right before he managed to lose enough speed to get it back under control and back to the hard shoulder 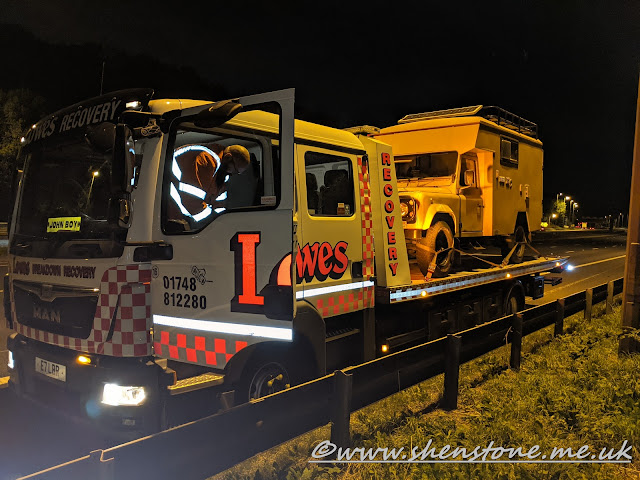 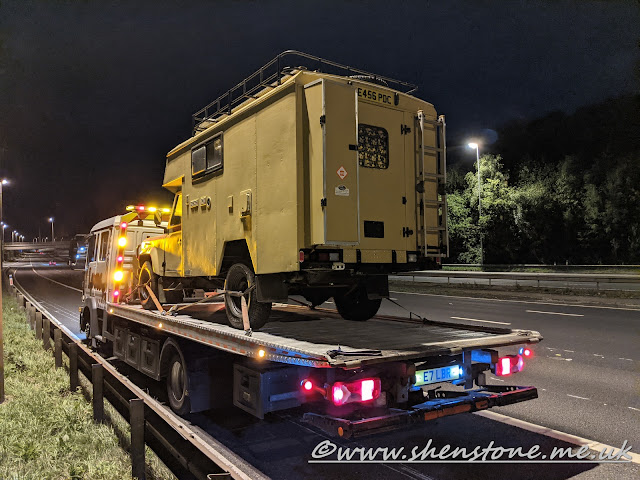 We stopped there for about 4 1/2 hours which was no fault of Lowes there was simply no mobile tyre service willing and able to come to us so Lowes had to dispatch another of their team (Matty) who got out of bed and came to our rescue. Along with John he bravely changed the wheel with live traffic running very fast and often very close where they failed to see the problem and pull out (I mean there were only 2 trucks with full sets of warning lights flashing reflecting off a brightly painted land Rover which is in desert not motorway camouflage hmmm...)
If you don't believe how visible it was try the "Disco Katy" video out !
They finally managed to get us back on the road and it was just a short ride to the Lymm truck stop at a bit over 5am where they unloaded us in the car park and loaded one van on the other to save one of them driving home. 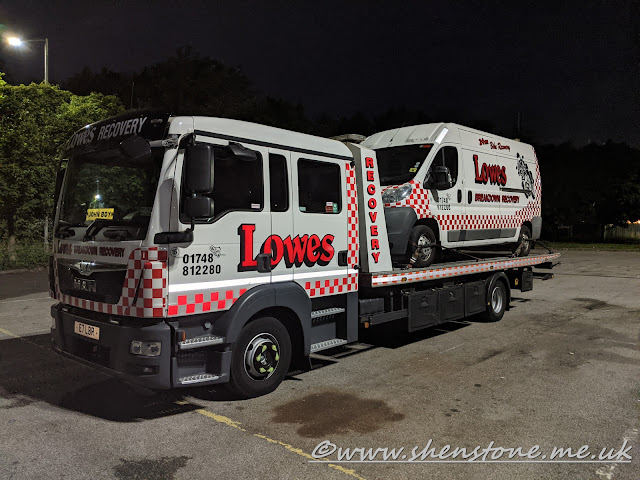 Of course all the plans had been abandoned at this point with no booked pick up time available so our plan was to get some sleep. We did manage to get a couple of hours before we were awoken with the news that we would be picked up again in an hour and off to Strensham as had been originally planned 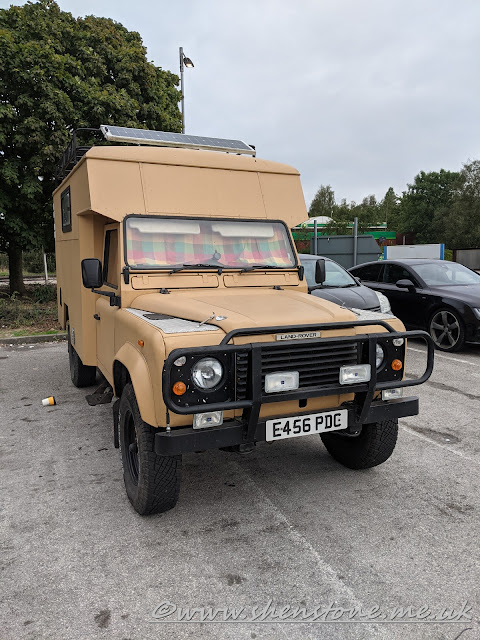 An hour later as planned, Barry from BRS  was our next transport I can't say a lot about that part of the journey because I know I kept nodding off ... 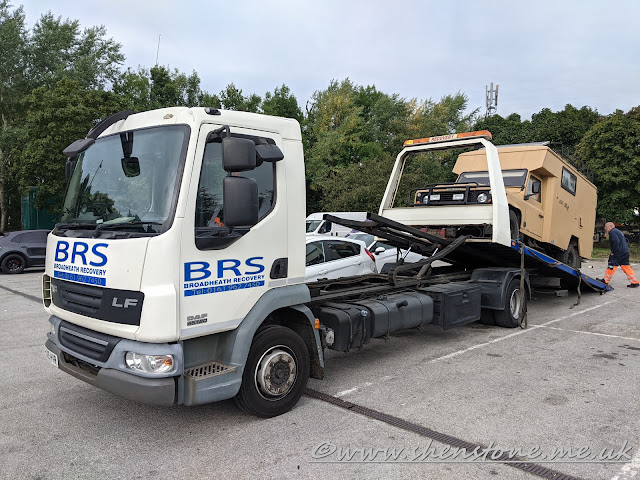 At Strensham he said we needed to be parked in a spot where a truck could easily get to the front of us so we were left in the lorry park where we made quite a comical sight, and the number of trucks that tried lining up for that parking spot before seeing us was substantial, but no-one seemed to get annoyed with us (sorry about the quality of this picture)

Sadly due to a miscommunication our next savour (Nathan) wasn't called immediately, but after another few hours delay we were incredibly glad to see him and his truck who were to be the last on the relay. 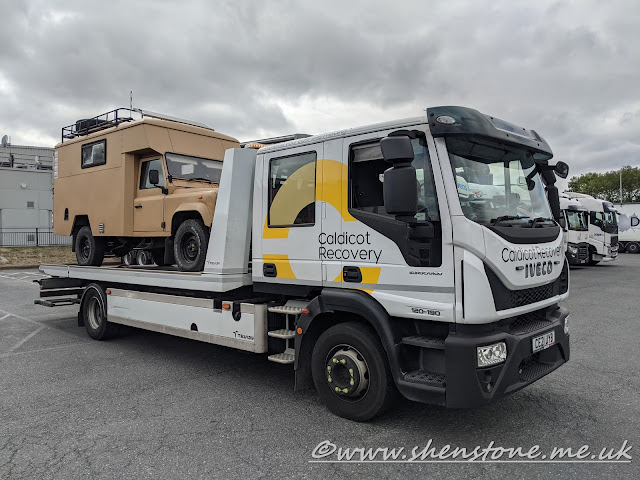 We finally arrived at Steve's workshop (which was our agreed drop off point) a little after 5:30

As I said many thanks to all who helped us from Furness, Lowes, BRS and Caldicot, but most of all our thanks to John from Lowes because we even got a text the next day to see if we had got home safely ... Excellent service !

Posted by Shenstone at 15:12 No comments:

We have been looking for an awing that will go on the back for a while. We did actually get one that was meant for a caravan which we tried out and took to France with us on the Alps trip, but it was bulky, had to be taken down even for a short move and  in the end because it was too short I tore the top of it with the door when  I opened it one time
After a spot of recent browsing I came across this small over door porch https://www.isabella.net/uk/accessories/details/door-canopy-for-caravan-black which was meant to be self supporting and just needs fastening to the bodywork or holding down with 2 pegs of you are on soft ground
I had hoped to try it out on the Gower trip, however even though the sun was shining it was a bit windy to try something new so this last weekend we tried it on the drive and it is above the door which is perfect.
I also recon that if we wanted to we could drive a short slow trip (to a local shop etc) without having to take it apart 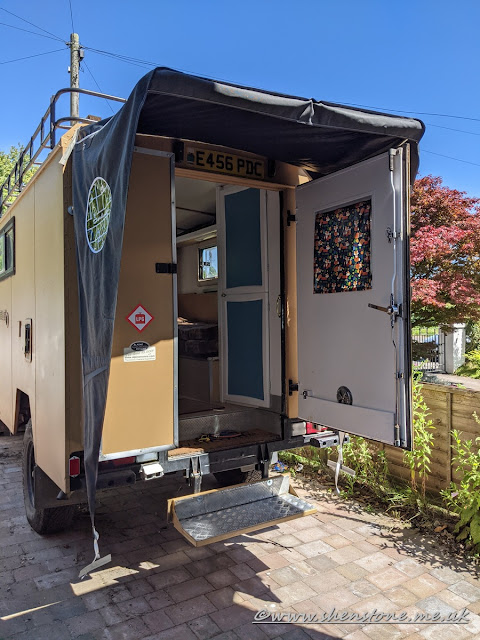 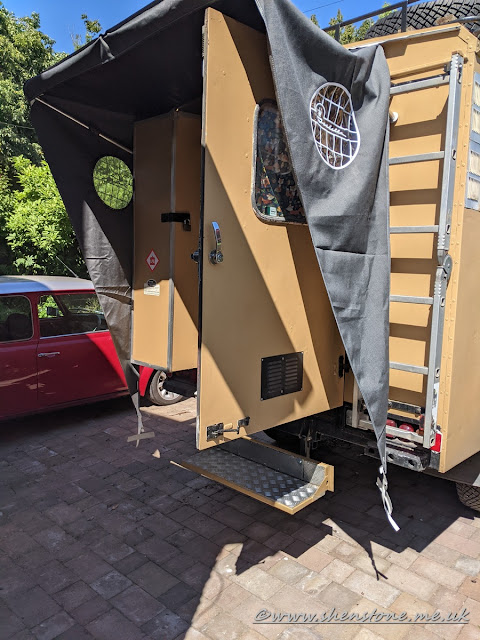 Posted by Shenstone at 15:50 No comments:

Refurbishing the inside and outside, replacing gearboxes and upgrading other items and above all going out and having adventures